Things We Aren’t Meant to Find During the DeCluttering Process 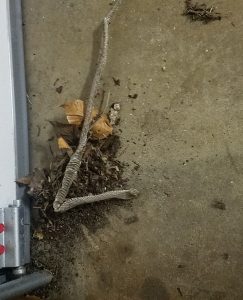 I came across this snakeskin during a DeClutter session the other day and I wondered where he is now, is he behind the next box, has he already left the garage?  It made me think of the reason he was there in the first place, he probably was looking for his next meal and followed the scent of a mouse.  We find so many mice in basements and attics!

Then I started thinking about how we should all protect ourselves while DeCluttering from sharp objects, rodents, snakes, toxins, allergens, heavy items…and possessions we never want our friends and family to see.  These items can take the form of hidden bottles of alcohol (empty or full) or stashes of drugs or their paraphernalia.  Items such as these might not represent who we are NOW or who we are attempting to be in the future but there they are, still present in our home, like a weight around our necks.

Now is the time to DeClutter items that no longer have meaning to you but might be hurtful if your children or loved ones found them.  We have had children uncover their mother’s engagement announcement to a man besides their dad that was posted in the paper, they had no idea their mother was engaged before being married to their father.  Their parents were a long time, loving couple, they had never thought of the possibility that their mom had been in love with someone before their father.  It was shocking and I’m sure their mother had no idea of the pain that clipping would cause 60 years later.  Seemingly, it was saved in the moment and forgotten in the pile of memorabilia and hurt of the breakup.  But, here it was, being uncovered by those she would have protected from this knowledge at all costs.

Look at your possessions, especially the hidden ones, ask for help clearing emotional-producing items out of your life if you cannot do it alone or leave the premise and let someone else clear them out for you if they still hold a lot of power and emotion over you.  Contact DeClutter By Deirdre for help with these emotionally charged DeCluttering Sessions. You can do tough things! I believe in you!